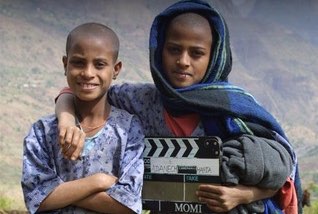 “Audiences want to be entertained, not educated”

You are a graduate of the National Film and Television School, and have produced travelogues and documentaries for ITV, National Geographic TV and Animal Planet. Can you tell us a little about this experience?

Making TV programmes is great fun, it’s also a huge privilege. First, you have a crew who are all talented technicians who are at your disposal and want to help you look good. Secondly, it’s enormous fun and can take you to fascinating places in the world. And thirdly, you are taken into people’s loving rooms and allowed to share your thoughts and ideas with them, which must always be respected. It has its adventurous moments too and I’ve been chased out of a mosque on the point of an AK47, had to pay a witch doctor the bribe of two goats after he had shut down our shooting, and been cuddled by a spider monkey in the Mexican jungle. Not quite David Attenborough bonding with gorillas but it did for me. The icing on the cake, of course, is making travelogues. They’ve included filming a climb on Mount Kenya, sailing on a riverboat down the Ganges to Varanasi, and filming the rock-hewn churches of Lalibela in Ethiopia.

Your book Lights, Camera, Jemuru –Ethiopia through the lens of a community film school is an uplifting story of young film makers transforming the lives of ordinary people all over Ethiopia. What was your inspiration for the book?

Very simply, their story deserved to be shared. The film students were 6 teenage boys and girls plucked from some of the poorest backgrounds in Addis Ababa, including kids who had been living on the street. They had to learn English, master a complex technology, learn to work in teams, and develop a journalistic and creative voice. This last part was especially difficult for the girls as they were not brought up to have opinions let alone express them. They went on to make films that addressed a wide range of health and social issues in Ethiopia, giving a voice to minority groups all over the country.  They also pioneered behaviour change drama film-making which tackled difficult taboo subjects like FGM and social exclusion. It took an enormous amount of hard work, commitment and tears and at the start may said it couldn’t be done, but in 2014 they were awarded the Special Award at the One World Media Awards in London, the Oscars of developing world film-making. The book gave me the chance to celebrate their remarkable achievement, paint a positive portrait of Ethiopia which is a beautiful country with an ancient culture, and most of all show what young people all over the developing world can achieve if given the chance.

Is there a secret to good travel writing?

If there is a secret I haven’t found it yet. Like anything that’s a bit creative there are a few basic principles you have to learn and then it’s all about practice.  But what a lovely subject to keep working at again and again. My inspiration is not a fellow travel writer like Bill Bryson, it’s actually an Italian painter. Everyone knows Canaletto’s panoramas of Venice which portray the city in precise detail, but a lesser known painter called Guardi painted almost impressionistic views of Venice. Guardi doesn’t simply portray Venice, he evokes what the city was like at the time, and it is the Guardi effect I aim for when I write a travel piece. A strong narrative idea helps too. Travel writers are supposed to be sensitive people and travel is an enriching experience. How did the places you visited and the people you talked to make you feel about a city or country, and about yourself? If you can capture a little of that you’re more than half way there. Oh, and bad experiences generally make for good copy.

What is the magic and what are the mechanics to compelling story telling?

The magic of storytelling is the effect stories have on us. It’ down to psychology, and we are all of us hardwired to react to stories like nothing else. Stories are more memorable, more persuasive and more effective at helping us make sense of the world around us. I always think it’s ironic that we read children stories in bed to help them get to sleep, because what we’re really doing is waking up their learning and critical faculties in the most extraordinary way, building a tool in their brains they will use throughout their lives. The other beauty of story is that all stories are based on a few basic storytelling principles that go back to Aristotle and are still the basis of J K Rolling’s success today. What’s more, you don’t have to be a playwright or novelist to make use of them. When you know how to use the basic mechanics of storytelling you can become a lot more persuasive in your day to day life, more entertaining, and, should you wish to, you’ll be able to get away with telling whopping great lies.

You have made behaviour change drama films. Can you explain?

This was in Ethiopia where I worked at a community film school. Like many developing world countries, Ethiopia has more than its fair share of economic and social problems. Take early marriage for example, which sees girls in the countryside being married off as young as 8 or 10, and to men much older than themselves. Often they run away and end up working on the streets in the cities. A drama film that shows how a young girl’s life is destroyed can inform audiences and inspire change. We learned that the trick is always to make the film more about the character and the story than the issue. Audiences want to be entertained, not educated. We made films like this about all sorts of issues which were commissioned by NGOs and aid agencies working in Ethiopia. The films would be made out in the regions, using local farmers and people from the community as our actors, and then the film would be shown on the back of a pick-up truck that would be driven all over the region. Schools and villages would empty and people would stand under the shade of an acacia tree and watch the film. Then a discussion leader from the NGO would start a conversation about the issue portrayed in the film. That’s how they worked. Because a lot of issues surrounded girls’ ands womens’ issues it was a bit like Thomas Hardy or Charles Dickens meets EastEnders.

You talk of film grammar in regard to making a watchable video. What, in a nutshell, is film grammar?

Film or video is a means of communication like language, and like language it also has a structure – or grammar – which makes it work. With language it’s spelling and sentence construction and the like. Similarly, film grammar is the basic rules of construction that make a film or video watchable. They include principles like shot sizes and breaking sequences down into individual shots that can then be edited together seamlessly. It sounds more complicated than it is and the best thing is that when you know how you can watch any programme on television and see through to its film grammar. It’s a great trick that teaches you a lot about film-making and all you have to do is watch your favourite TV shows.